The latest and greatest outbursts from the Crab Nebula â€” long known for its steady high-energy glow â€” are challenging theories about how the heavens accelerate charged particles to high energies.

Only last year, scientists were astonished to find that the nebula â€” a giant cloud 6,500 light-years from Earth with the spinning cinder of an exploded star at its center â€” had spat out gamma-ray flares that fluctuated on time scales of only a few days.

Last month, however, the nebula outdid itself, says Rolf Buehler of the SLAC National Accelerator Laboratory in Menlo Park, California. The Crab hurled gamma-ray flares, more energetic and five times brighter than any previously recorded, that fluctuated over just one to three hours. Buehler announced the findings, based on observations with the Fermi Gamma-ray Space Telescope, on May 11 in Rome at the annual Fermi symposium. A second team observed the April fireworks with Agile, another orbiting telescope.

â€œThese recently discovered flares indeed present a new set of challenges and highlight our ignorance of how this fascinating [object] works,â€ comments theorist Dmitri Uzdensky of the University of Colorado at Boulder.

Earlier outbursts had already suggested that the Crab is producing gamma rays by accelerating electrons and positrons to energies around a quadrillion, or 1015, electron-volts â€” about 100 times higher than the maximum energy of protons at the Large Hadron Collider, the worldâ€™s most powerful atom smasher. Because no signal can travel a distance greater than light can in a given period of time, the rapid variation of the April flares indicates that the charged particles were revved up within a tiny region of the vast Crab no bigger than the solar system, Buehler notes.

â€œThe main question is how particles can be accelerated to such high energies so fast,â€ he says. The observations may require a new, separate population of energetic charged particles, similar to those that produce the strongest X-ray bursts associated with solar flares, says Jonathan Arons of the University of California, Berkeley.

Although the Crabâ€™s gamma-ray flares are believed to be generated by electrons or positrons gyrating around magnetic fields, the energy of the observed radiation is several times higher than such a process can normally produce, says theoretical astrophysicist Mitchell Begelman.

In a theoretical model proposed by a University of Colorado team of Begelman, Uzdensky and BenoÃ®t Cerutti, the charged particles are accelerated near the nebulaâ€™s center where magnetic fields are violently rearranged, unleashing enormous amounts of energy in the presence of a strong electric field. Charged particles get sucked into the region, and the field enables them to form a higher-energy beam â€” and generate higher-energy radiation â€” than they normally would. The researchers posted their work online at arXiv.org on May 5. Although the study is based only on the older flares, the overall picture remains the same for the April outbursts, Uzdensky says.

Regions where magnetic fields are violently rearranged generate turbulence and undulations, which may result in wiggles in the beam of energetic charged particles and the gamma rays it produces. The fluctuations may occur simply because a wiggling beam could be seen only during the short time it swept across Earthâ€™s line of sight. 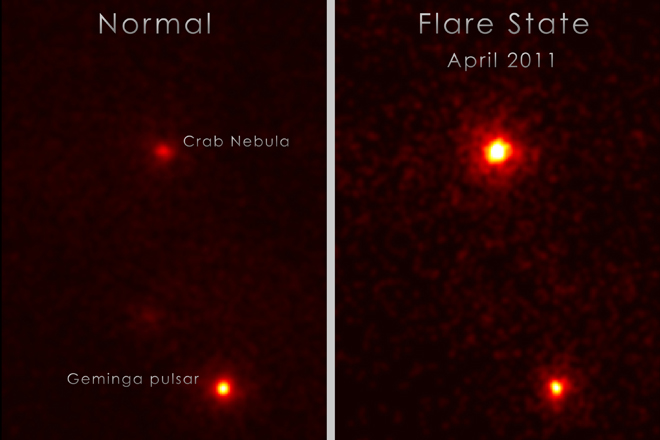